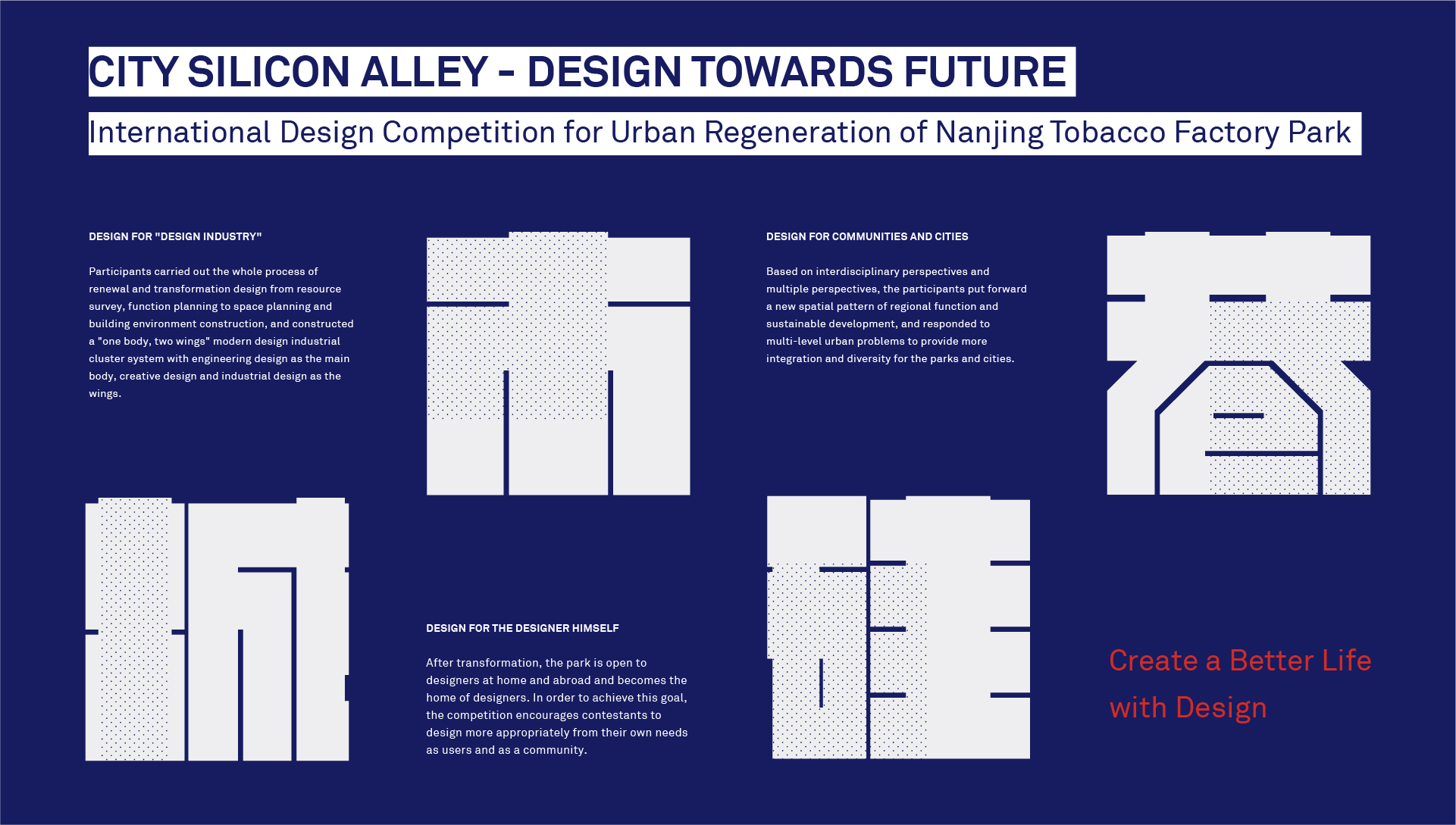 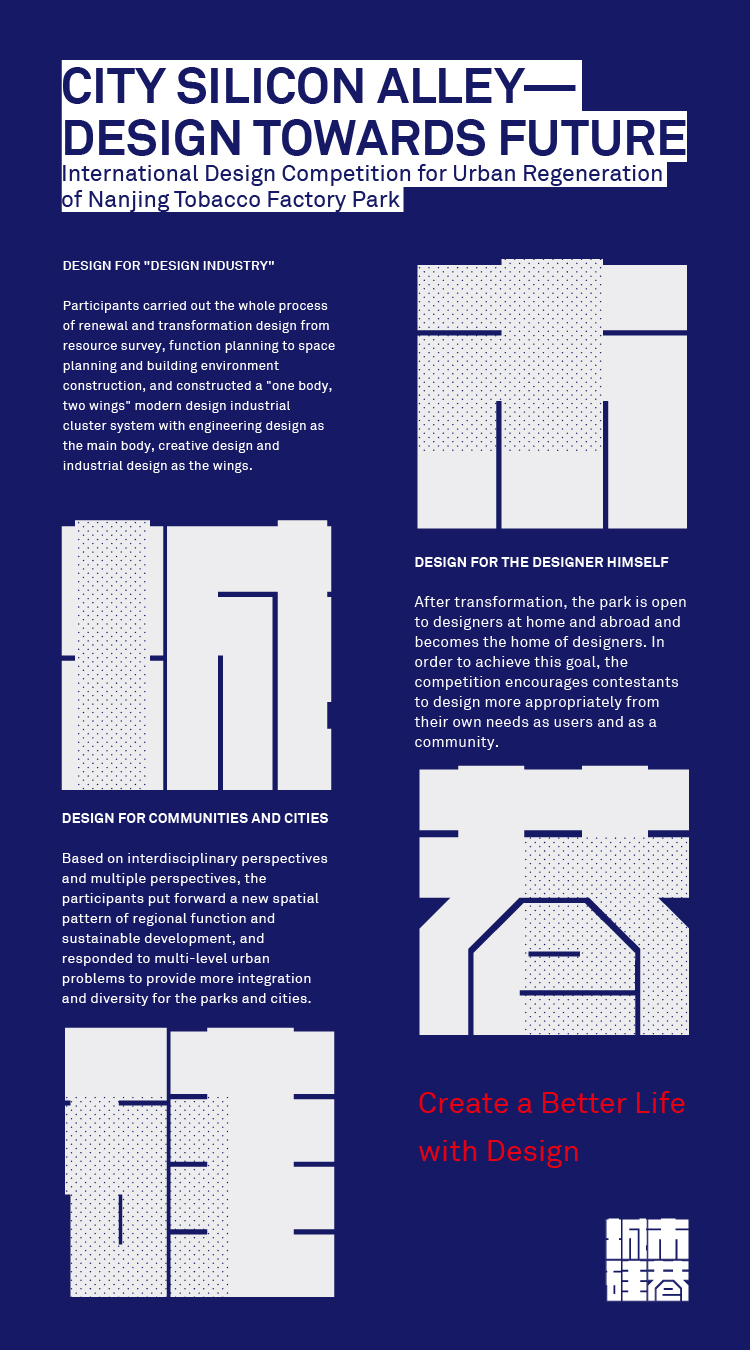 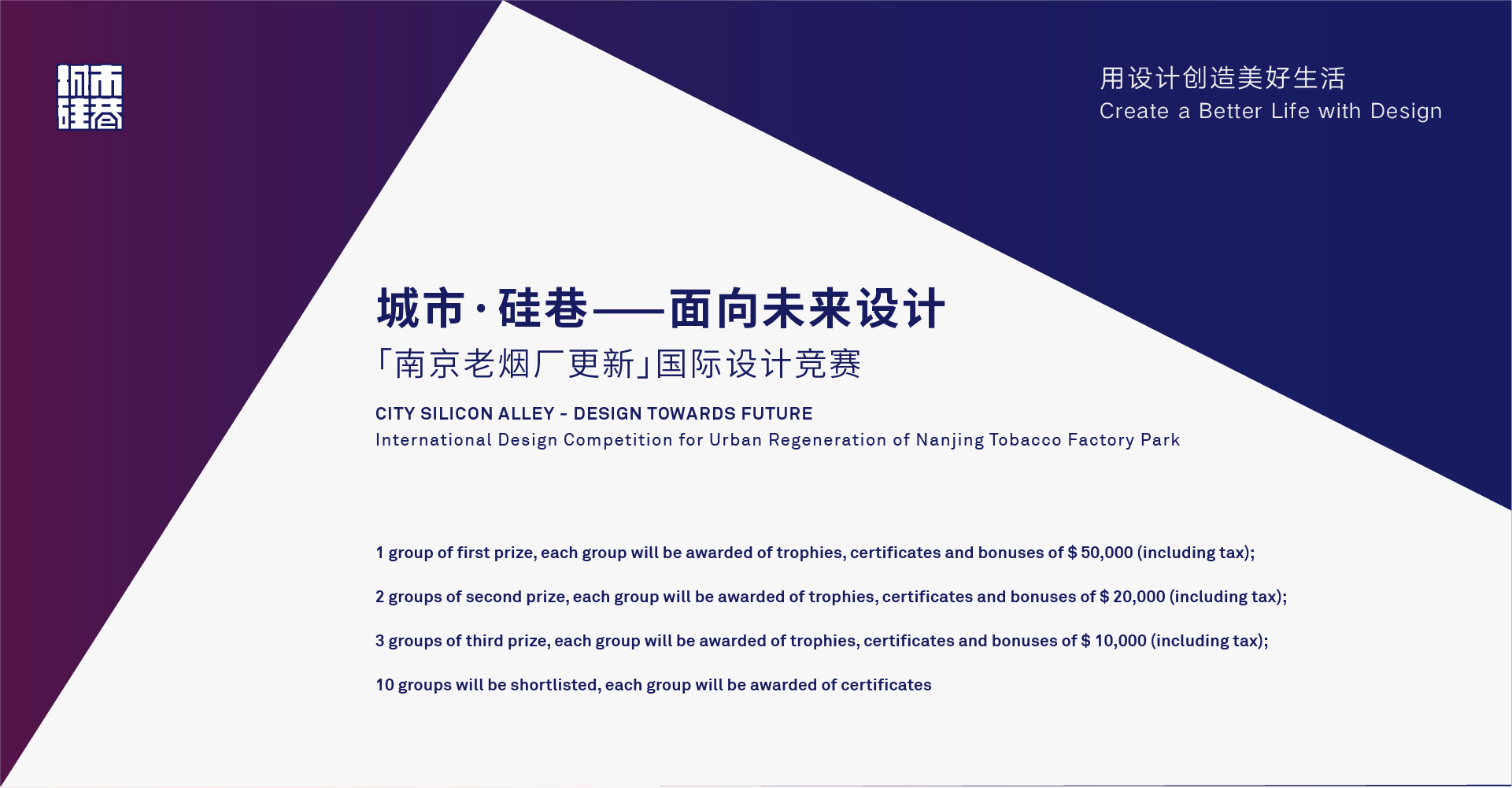 The competition is divided into two rounds: 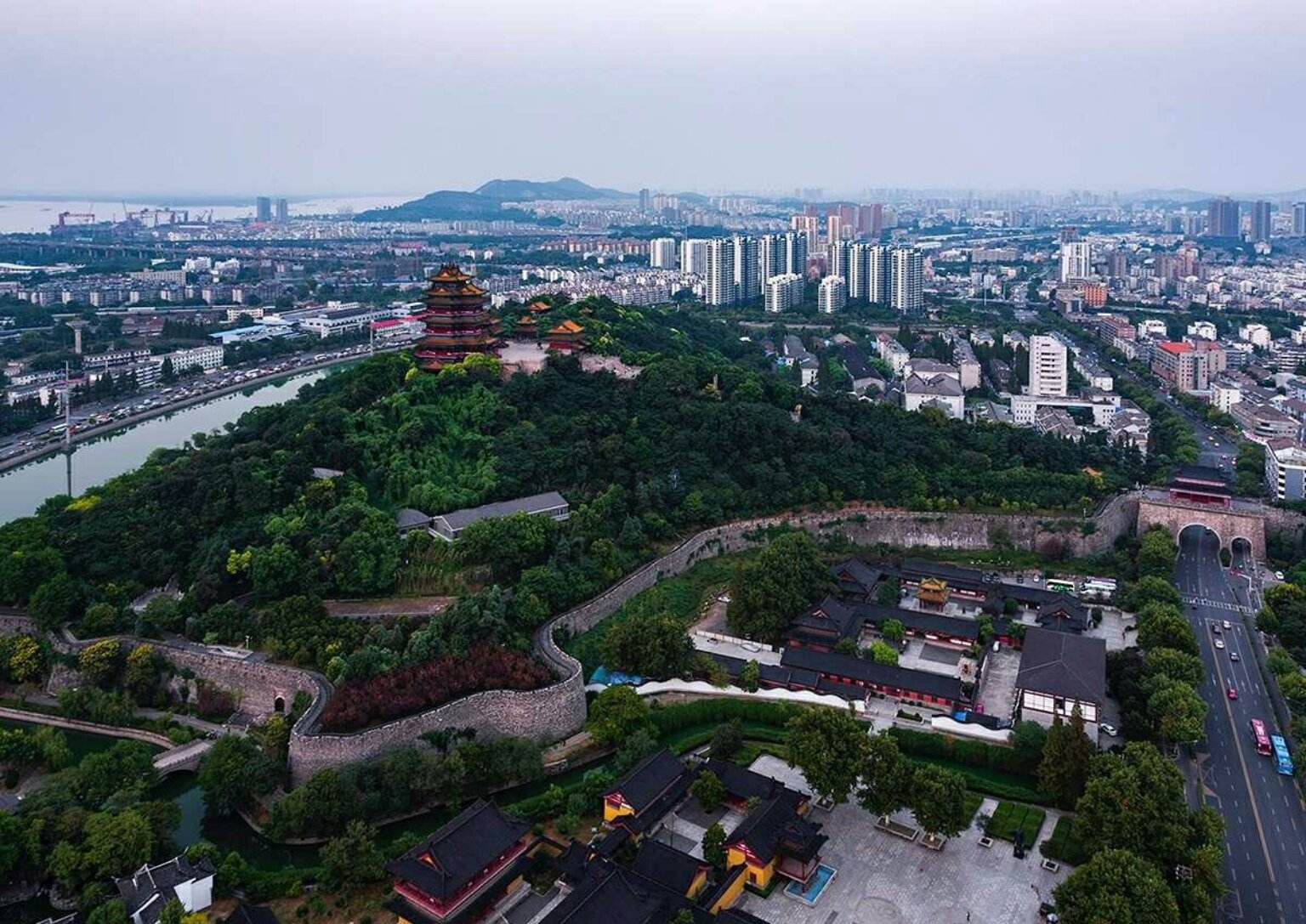 In 2019, Nanjing put forward an important goal of developing city “silicon alley” and building a new famous city. Derived from Manhattan, New York, “Silicon Alley” is a borderless science and technology park gathering Internet-based and mobile information technology enterprises. Unlike the Silicon Alley which is an innovative technology park built on the edge of city with complete supporting high-end service, the Silicon Alley is a street block of innovative technology industry which mainly focuses on upgrading stock space.

Nanjing’s envision to build up a city “Silicon Alley” will promote Xuanwu district as core area to renovate old factories and campuses, inject new vitality to the scientific and teaching resources of high-learning institutions in the downtown, and build a city “Silicon Alley” with compactness, supplementary functions, improved structure, college-enterprise convergence, integration of industry and city, and active innovation and start-up.

The city “Silicon Alley” represents the development pattern and industry layout of a city from upgrading to innovation. In particular, the design industry represents the important development momentum of “Toward Future, Leading Innovation”. Adhering to this philosophy and based on the historical experience and unique advantages of the forte of architectural design of Southeast University, Nanjing Xuanwu District is committed to gathering quality design resources at home and abroad to Xuanwu’s city “Silicon Alley” with the design industry as its core component.

Centering on this goal, five plots around Sipailou Campus of Southeast University (former site of Central University), including old Nanjing Tobacco Factory, Court Plot of Xuanwu District, and Technology Park of Southeast University, are committing to form an innovation industry belt around Southeast University gathering design industry. With the long history of Sipailou Campus of Southeast University and its surrounding area, significant sites of China’s modern architectures and representative cultural relics, and manifestation of the convergence of Chinese and western culture, it carries the important missions of inheriting essence from the history and facing future and aligning with the international practice so as to improve space quality, upgrade industry functions, consolidate and gather resources, and build up an innovative downtown from within the great environment of urban development.

Based on that, Xuanwu District selected old Nanjing Tobacco Factory as the start-up project of the innovation and design industry belt around Southeast University and host the global design competition of upgrading old Nanjing Tobacco Factory. The competition is themed on “City Silicon Alley, Design towards Future”. Domestic and international architects and designers are invited to create their works on the former site of Nanjing Tobacco Factory. The park is positioned as a design & start-up park which mainly focuses on architecture design. At the same time, it will also serve Nanjing citizens to build a new business card as a design industry cluster, an urban emerging cultural street, and Nanjing Xuanwu silicon alley.

The theme of the design works should be integrated into the urban environment space where they are located, and embody the perfect unity of originality and individuation, so as to achieve a harmonious symbiosis of artistry and design, express the design foresight and highlight the cultural connotation at the same time, so as to improve the quality of living environment and create a better life with design.

The competition is to carry out the whole process of upgrading and renovation design from resource investigation, function planning to space planning and building environment construction through the renovation and upgrading of Nanjing Tobacco Factory, to build a modern design industrial cluster system with engineering design as the main body and creative design and industrial design as the two wings, and to build an urban spatial pattern with obvious regional functions and sustainable development. The competition will start from multi-disciplinary perspective, and respond to multi-level urban problems with diversified achievements.


1. It is to transform and upgrade the tobacco factory into a design creative park and form a modern design industrial cluster system with engineering design as the main body and creative design and industrial design as the two wings;

3. It is to create new communities and new formats around the design industry and provide more abundant integration and diversity for the city from an interdisciplinary and multi-angle perspective; and

4. It is designed for designers themselves, the transformed park is open to domestic and foreign designers and becomes their home.

The renovation project base of Nanjing Tobacco Factory is located at the intersection of Lane Lan and Beiting Lane in Xuanwu District, Nanjing. The area is close to 1912 Commercial Street. The former National Art Museum, Jiangning Weaving Museum, Jiangsu Provincial Art Museum, Six Dynasties Museum, Nanjing Presidential Palace and other buildings are distributed on the south side of the park. Residential areas are located on the north side of the park. The park was originally the former site of Nanjing Tobacco Factory, covering an area of 15,715.5m2, with a total construction area of 33,587.82m2.


The park is bounded by Beiting Lane in the east, Shipopuo Nunnery in the south, Xuanwu Hospital in the west and Yangjiangjun Lane in the north. There are a total of 13 buildings in the park, most of which are vacant. Some of the buildings in use serve as offices of Jinmengdu Group and packaging and production plants of tobacco factories. The buildings are mainly factory buildings and office buildings. There is a building in the time of Republic of China (Building E) in the park. Mandu Plaza (M0-M4) on the southeast is a commercial complex, with shops on the southeast frontage on the first floor, restaurants and cinemas on the second to fourth floors, with factories on the first floor near the inside of the tobacco factory park. 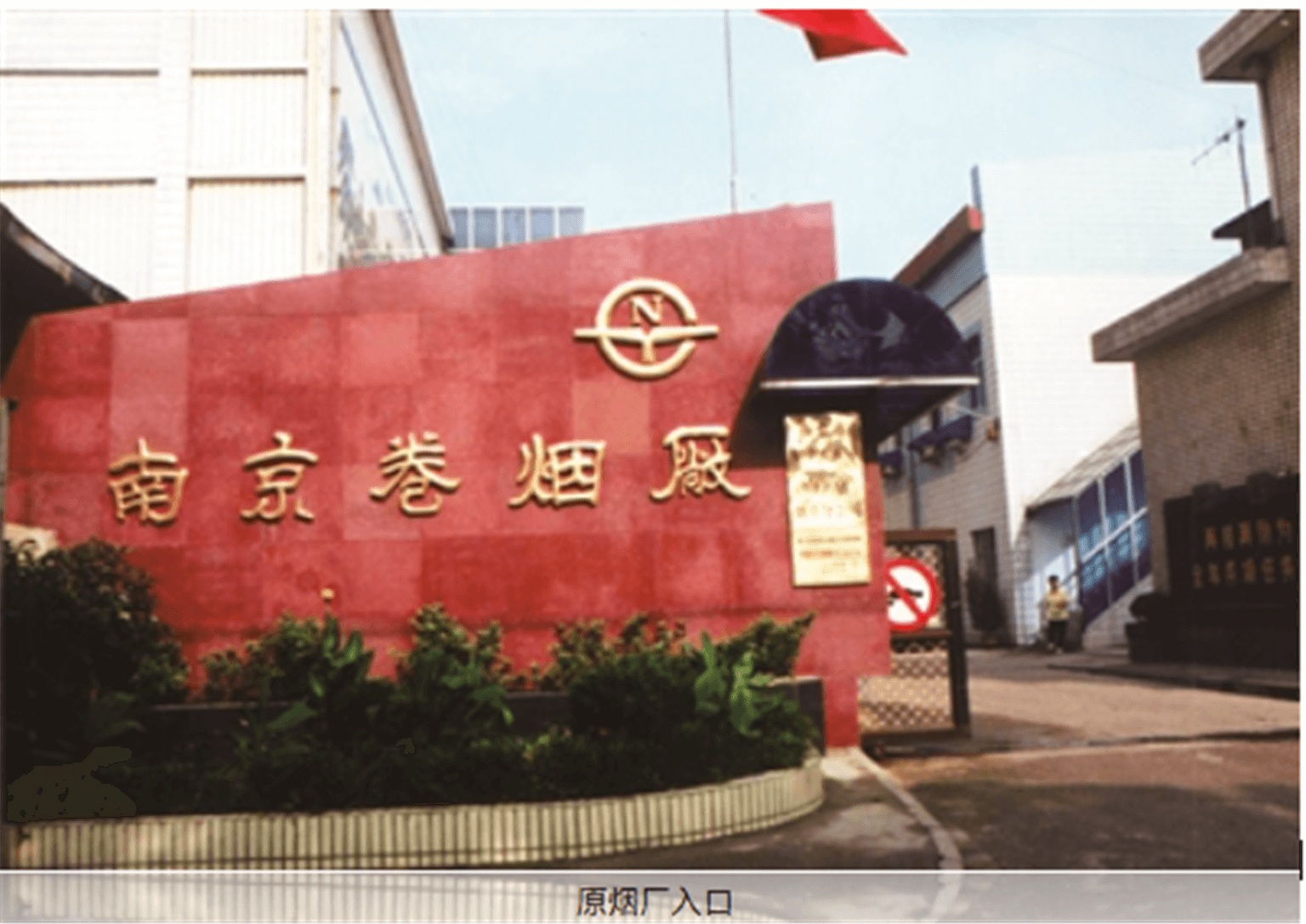 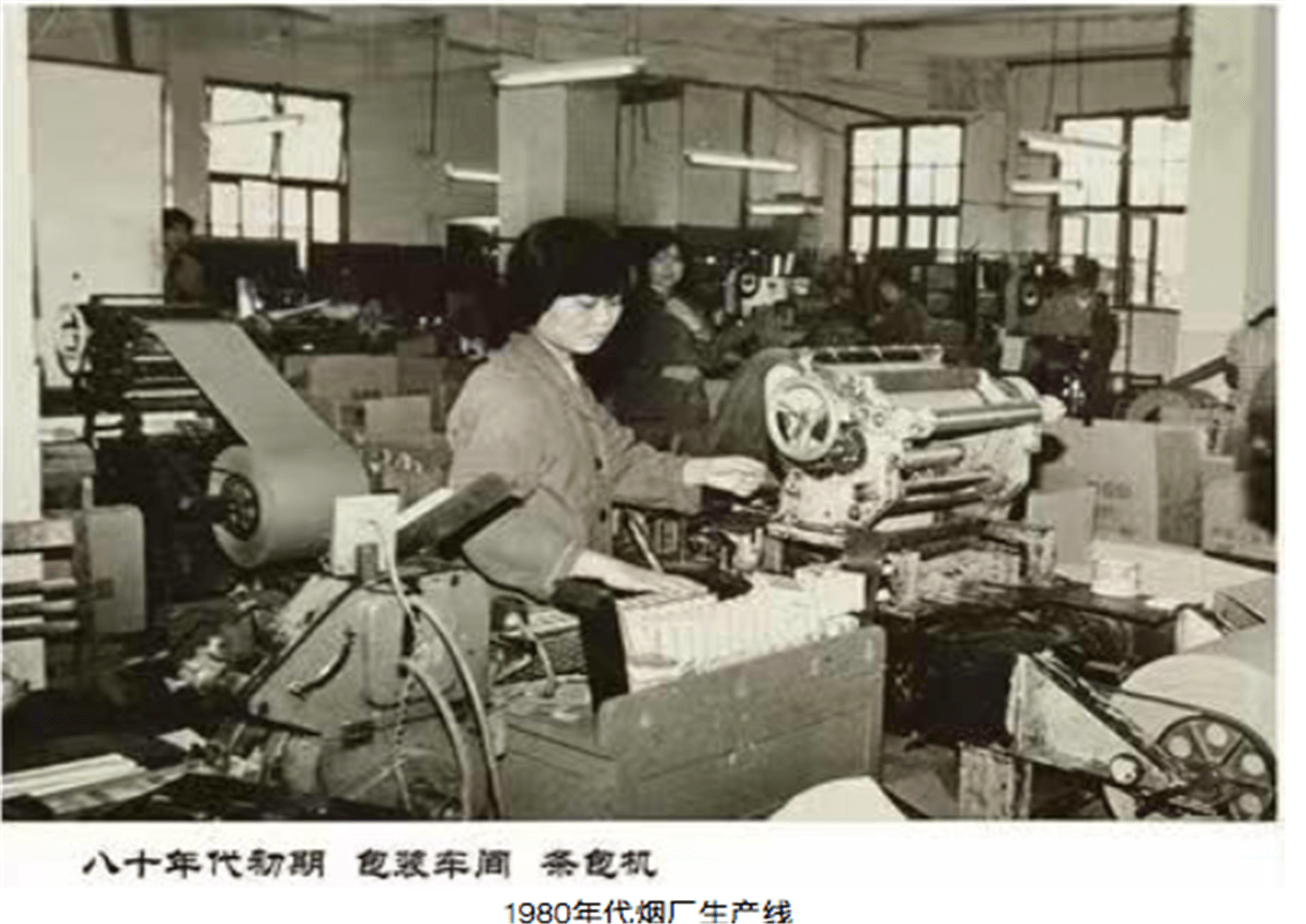 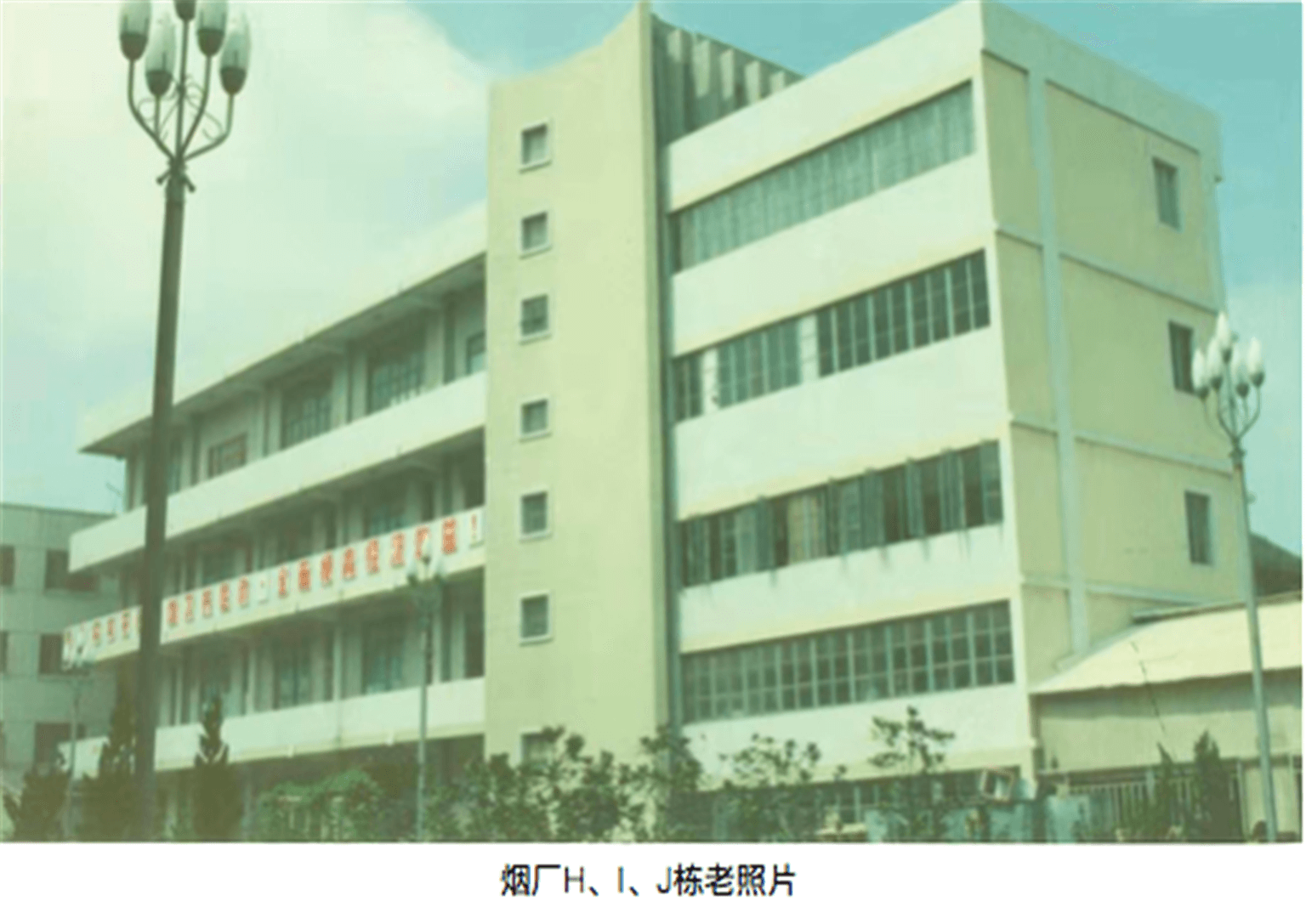 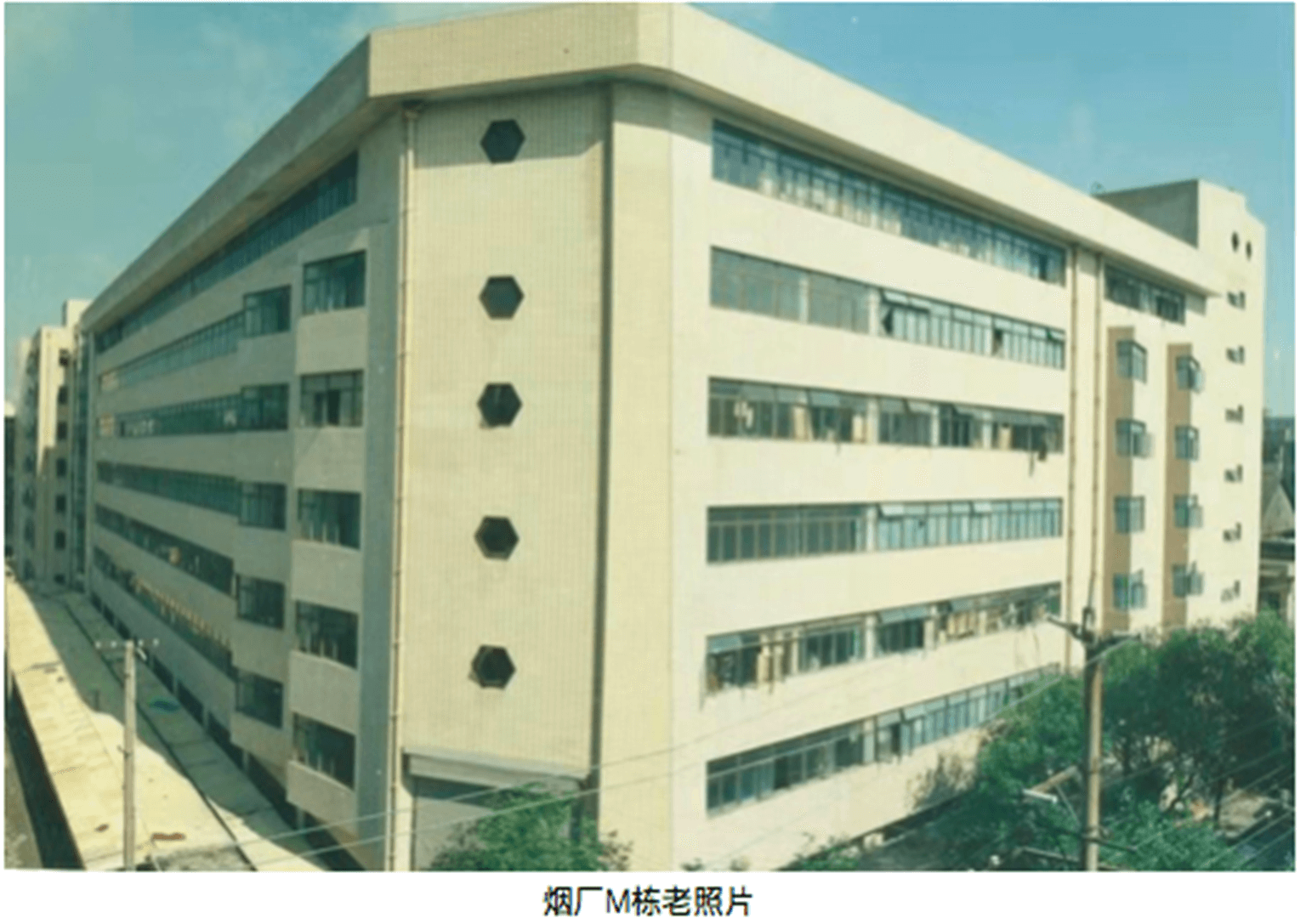 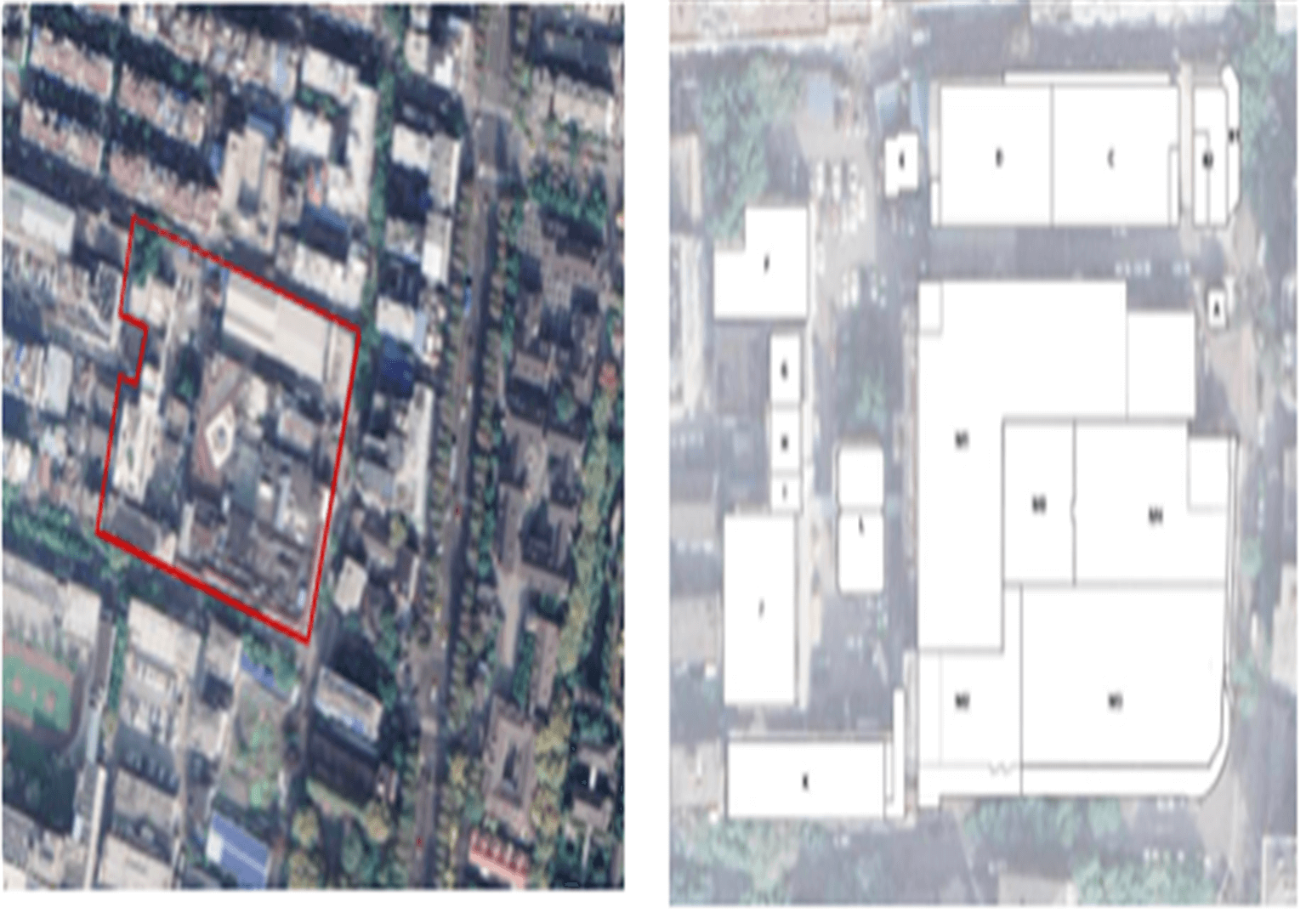 The scope of competition design is based on the design industry around Southeast University. It is a conceptual design scheme to upgrade the overall environment of Nanjing Tobacco Factory Park, plan various building functions in the park, design and reform the exterior facade and interior, upgrade various facades of Mandu Plaza, and transform and utilize the roof space of Mandu.


Participants should design for the ecological goal of the whole park, combine their own use considerations, and integrate extended considerations on community life, sustainability of industrial formats, smart parks, etc. to reflect the characteristics of integration and diversity.

Requirements for the Specific Design Task

Park Planning - The overall park of the tobacco factory will be re-planned and renovated, with the design industry park, which is dominated by architectural design industry, as its function, and other supporting functions will be implanted to activate the overall park. With the goal of creating a new business card for Nanjing’s design capital, the new concept of creating an creative park is put forward.

Space Design - Breaking the traditional design concept of factory renovation, the theme is “Dialogue with the Past”, “Old City, New Vitality” and “Facing the Future” to create a special space in the park. In the space construction, it reflects the cultural background of the ancient capital of six dynasties in Nanjing city, making use of contemporary design methods to create the creative space of Nanjing’s “new city” impression.

City and Silicon Alley - In addition to re-planning and designing the park, creating indoor and outdoor space in the park and landscape design, the renovation design should fully consider the driving effect of the park environment improvement on the surrounding urban environment, lead the future urban renewal development trend, integrate the development concept of city silicon alley, and transform the industrial park with the thinking of urban design.

The participants of this competition are mainly firms and designers engaged in design-related work. The participants and teams are determined according to the identity of the first principal creator. The same work cannot be repeatedly declared across groups. The number of participants in each group shall not exceed 10. 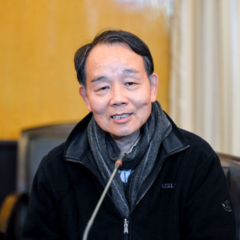 Academician, Professor, Doctoral Tutor, Chinese Academy of Engineering Director of Urban Design Research Center, Southeast University State-level registered architect Design Master of Jiangsu Province Member of the World Society for Human Settlements Environment (WSE) Mr. Wang entered the Department of Architecture of Nanjing Institute of Technology in 1978. In 1989, he received a doctoral degree from Southeast University and taught in the Institute of Architecture and the College of Architecture. He was successively deputy director, deputy department director, department director, and worked as dean from 2003 to 2014. In 2001, he was appointed as professor of the Yangtze River Scholars Award Program of the Ministry of Education, and at the same year he was awarded the National Outstanding Youth Science Fund. He was elected as academician of the Chinese Academy of Engineering in 2015. He is currently working as Vice President of the Chinese Architectural Society, Vice President of the Chinese Urban Planning Society, Vice Director of the Urban Design Expert Committee of the Ministry of Housing and Construction, Member of the Planning Review Expert Group of Xiongan New Area, Editor-in-Chief of Frontiers of Architectural Research, etc. 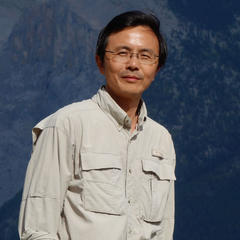 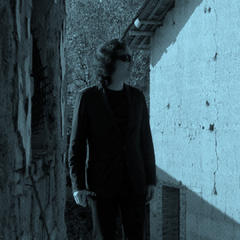 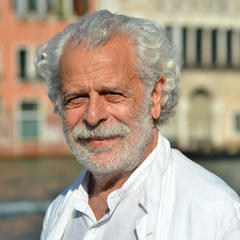 Architect, born in Venice, Italy in 1944. Graduated in 1968, became professor of “City and Territory Analysis” at the University Institute for Architecture in Venice (IUAV) in 1972; Since 1982 full professor of Town Planning; In 1988, visiting Professor at the Institut Francais D’Urbanism - Paris VIII. ;Between 1991 and 2006, he has been Rector of the IUAV University;Between 1991 and 2017 Venice Government Policy(art and architecture) AdvisorIn 1998 Marino Folin was Curator of the Italian participation at 6th Architecture Exhibition Venice Biennale (Hans Hollein Director).;Since 2006, President of IUAV Foundation (-2013);Vice President of Fondazione Venezia (-2012);The President of Venezia 2000 Foundation;Since 2013, President of Fondazione EMGdotART (-Until now);Amongst others, he has been a member of the board of directors of Milan Triennale.Founding member of the International Academy of Environmental Sciences (IAES); Coordinator of the Scientific Committee of Venice's exhibition in 2015 Expo in Milan. 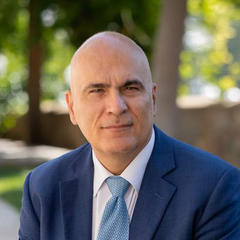 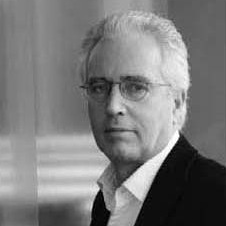 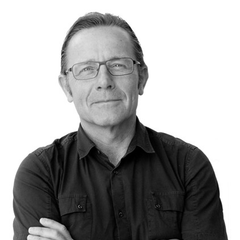 1. Participants log into the official competition platform www.zscssj.com（http://www.aki.com.cn/zscssj） click “Online Registration” to fill in the detailed registration information. This competition is free of charge. You must register in advance and submit your work only after you have confirmed your success. For team applicants, the number of team members shall not exceed 10 in principle, and each team shall designate a unique contact person.

2. Click “Upload Works” to submit the works online. For the competition, all submissions shall be made electronically. The Organizing Committee will not accept mailed or paper documents. Please refer to the website for detailed submission procedures. The submission time shall not be later than 23:59 Beijing time on December 15, 2019; otherwise, they shall be deemed invalid.

3. The official languages of the competition are English and Chinese. The text, key notes and drawings submitted must contain English. Foreign participants can choose English, while Chinese participants can consider using both Chinese and English for typesetting. The Organizing Committee will inform the finalists to make exhibition boards. The specific size and requirements of the boards will be notified after the preliminary review.

4. The submitted electronic drawings and explanatory documents shall not contain any marks such as characters or patterns related to the names and organizations of the participants; otherwise, they shall be deemed as invalid works.

Scheme display and review documents: pdf format documents (no more than 50 pages, white background, 4:3 ratio. For online display, please upload PDF as attachments. At the same time, each page shall be cut into pictures and uploaded to personal pages for display, each shall not be more than 10.0MB, pixels are not limited). They shall contain the following items:

3) Other auxiliary explanatory materials (such as videos, models, etc.) can be submitted according to their own requirements. 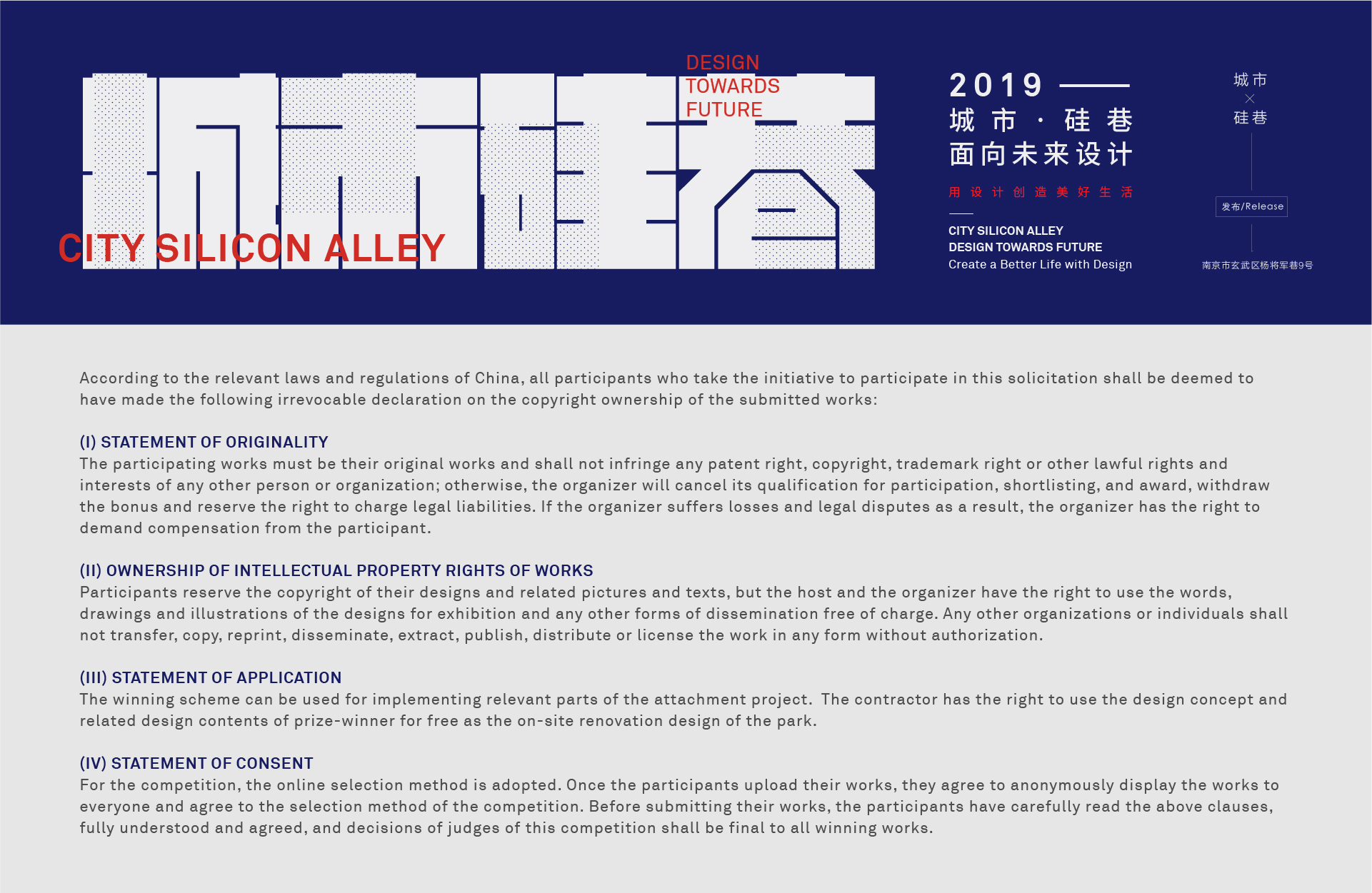 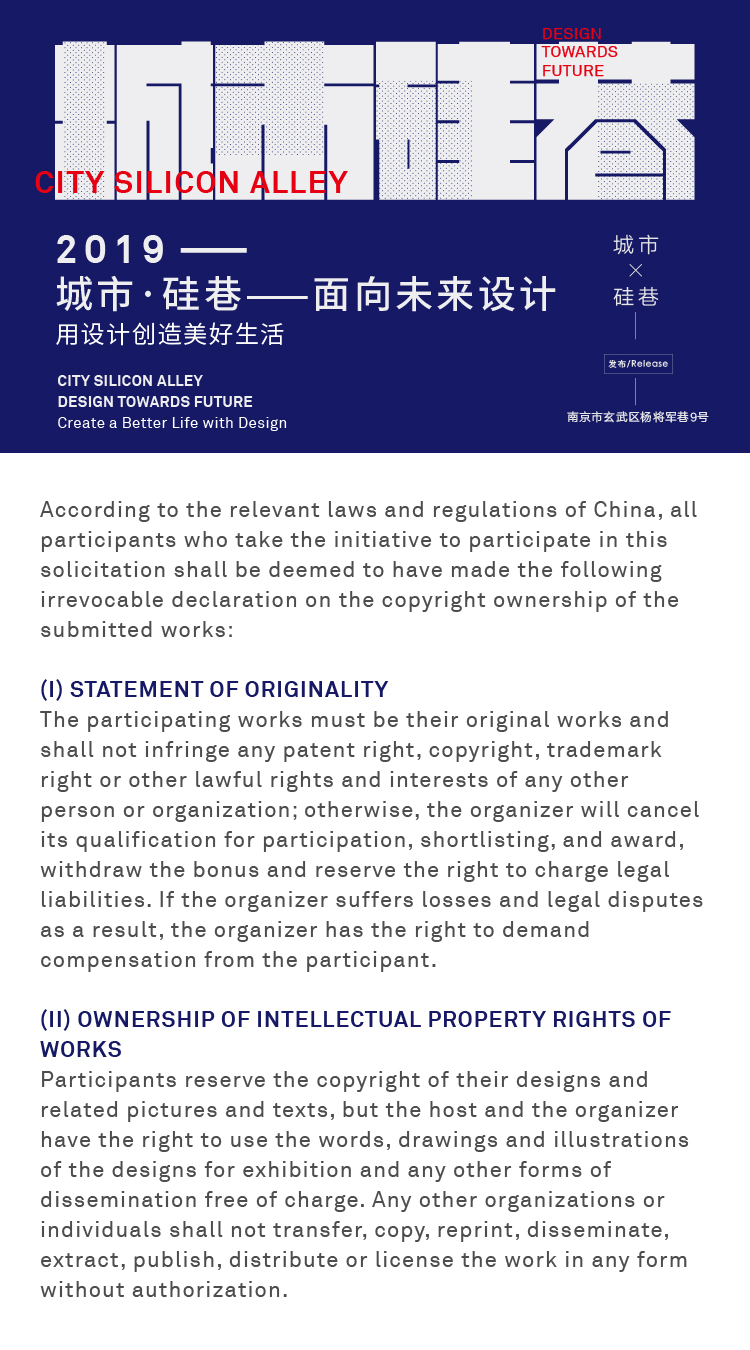 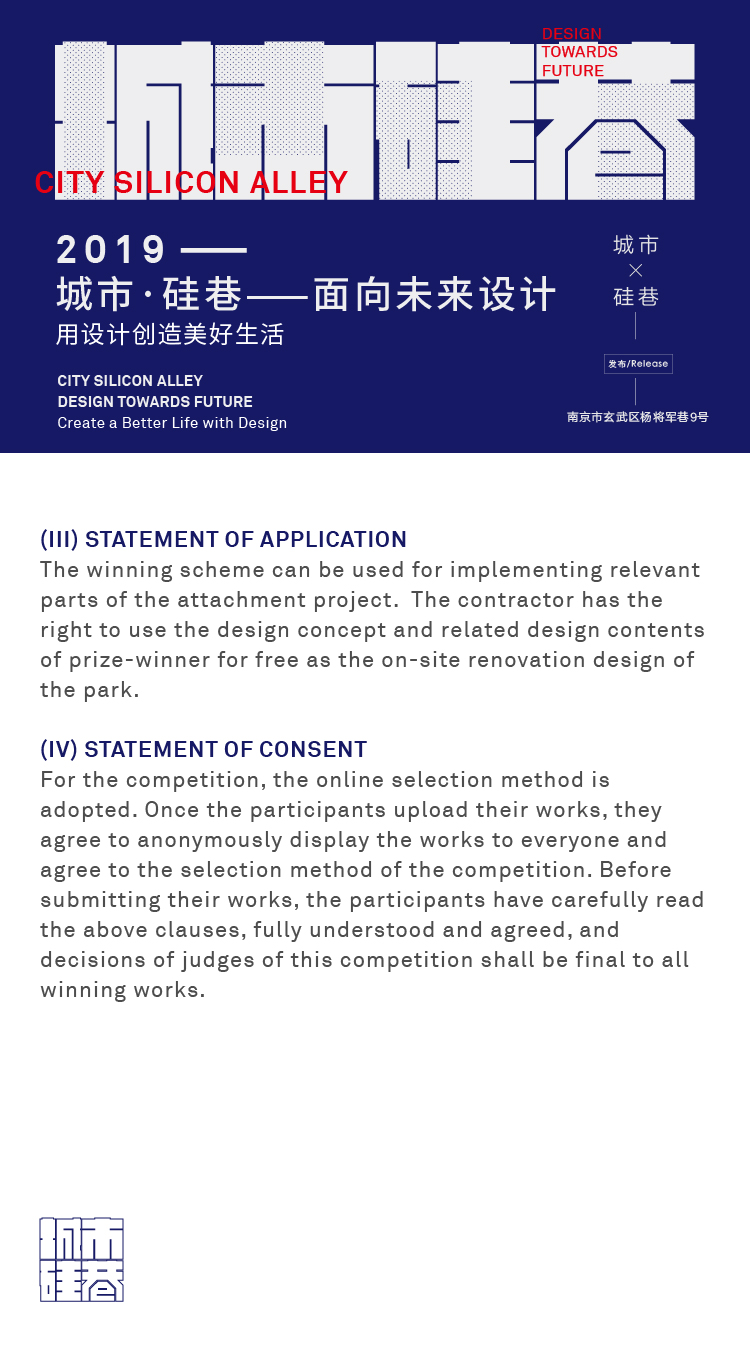